Much to my other half's slight annoyance of using my current QL setup in front of the dressing table where I have perched our redundant second TV for anyone staying over to watch something, although it will have to be DVD as I haven't got around to putting in an aerial for that room yet and I lost the impetus since Virgin gave us cable.

I say gave, I seem to be paying a far bit for it, anyhoo, I had two QLs sitting in their boxes for some months before I got one out to test it (I haven't actually told my financial adviser that I got two yet, one is hidden up in the loft, maybe some other time), and obviously it didn't come with an aerial lead, rather than buy one I thought I'll make one up. A few days later using all white components I am a proud owner of a 4 meter aerial lead for connecting the QL to the TV. 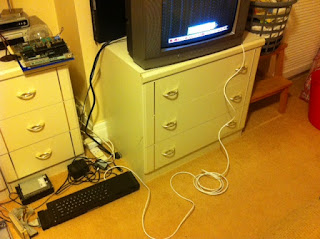 Plugging everything in and switching it on was my first disappointment, I had flashbacks to a recent (either the QL forum or the mailing list not sure which) comment from someone who was experiencing what seemed to be a number of hardware issues under the bonnet of his QL with some home brew modifications to boot (no pun intended). One of the issues resulted in the appearance on the screen of streaks especially where white was the colour, across the display, unfortunately this was exactly what I had! My first thought was I had a fading fast QL. 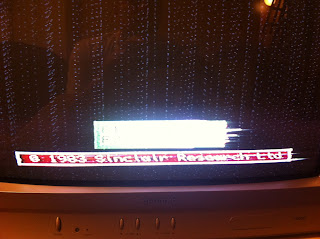 However now with my proper head on I realised pretty quickly that the length of cable could have something to with it. so off down to the local electronic store to buy another extortionate priced component a seven pin DIN plug.

This is where yet another 'dawn of realisation' occurs, its been 20 odd years since I have done any serious electronic work, for a start I now wear glasses and looking at tiny pins for soldering with a steady hand was long gone. I un-retired my trusty rusty soldering iron however, and set to work making up a DIN to Scart lead. Well I am happy to say that worked fine except for one slight problem which you may be able to see in the image below. Somewhere along the lines of reading the pin outs, colour coding of the Scart plug cables seems to have gone awry, oh well. 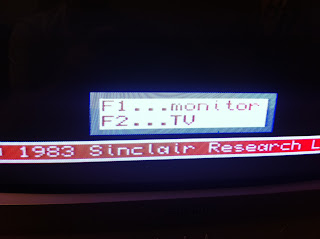 Yes, I know "shouldn't that border be green?"
Posted by Back 2 the QL at 20:48
Email ThisBlogThis!Share to TwitterShare to FacebookShare to Pinterest