Man Down! Get Me A Medic

I recently got hold of some QL peripherals, from that well known car parking space named and located between D-Bay and F-Bay. What attracted me to the purchase was one particular item, a floppy disk interface board that the seller stated was from Medic, and for those who do not know the history surrounding Medic in the early years of the Sinclair QL then they should look it up somewhere, I am sure an accurate description of what actually went on with that company is written down and just wants to be found.

From my perspective however, as a then QL owner and a potential buyer of QL add-ons but without the actual finances to do so, Medic appeared to have the X-Factor, the very flashy and colourful ads in the QL magazines couldn't fail to impress, they seem to be giving away nearly free, four colourful games while potential buyers were waiting for the all in one package of memory and interface to make its appearance as demonstrated at one of those Sinclair Shows. It was expensive I seem to remember nearly up to the price of the original QL and although I used to dream and drool over the advert (once a month it seems), I could never afford it. I did send off  for the games though,  I cannot remember if I had to pay anything, something like postage or some other cost, alas I never got anything in return.

The image of that cleverly design expansion box surround in keeping with the design of the QL, a very natural looking extension and the description of how good the system was, must of stayed with me, as when the Medic Circuit made its appearance I just had to obtain it, so I did. It was not guaranteed to work but that didn't matter, it was another piece of my QL history hunger that I find myself needing to satisfy. Well here is a picture of the interface card, you can see the external power coming from the large smoothing capacitor to the top right. Slightly above that, being a blank bit of the circuit board where I suppose the the voltage control chip and heat-sink would be, it seems about the right sized space for one with a linked out holes for a 3-pin 78?? regulator. 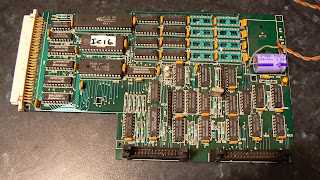 Two x dual row sockets which I am reliably informed is the floppy disk connection and a (bi-directional) parallel port. Of the three large chips top left, one is an EPROM 2764(middle), the one below is an 8059 or WD1770 and the largest chip is marked as a 4500A. The memory chips are M5K4164 and I suppose that filling the other 8 empty sockets with same would increase the memory to a maximum of 512K the standard for the original QL, that is if it works, still yet to try that, maybe at the weekend.

On another matter:
Considering the short and sporadic time I have been using a real QL he last couple of weeks, today I distinctly noticed two quirks (no not the Tetris clone, different spelling). The first was that I was starting to get used to the keyboard and not watching intently the keys being pressed, considering most of the commands I actually to is DIR LOAD MDV1_ and FLP1_ you could say his is hardly surprising, however secondly reverse side of things is that I still cannot get used to left/right arrow keys way over to the left of the space-bar and not to the right as they I expect them to be, hmmmn!
Posted by Back 2 the QL at 22:06
Email ThisBlogThis!Share to TwitterShare to FacebookShare to Pinterest