The drive to encourage and attract younger people to QUANTA and the QL programming experience frustratingly gathering the pace of treacle.


Raspberry Pi being a hardware device that could work with the QL emulation software is starting to have a presence, again with the same intent to attract the next generation in to programming.


Another area with the same goal makes an impact, although it has been around awhile, it is the first time I have come across it via the RP website. 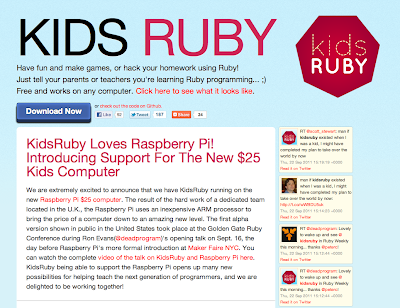 http://kidsruby.com/
KidsRuby is software available for the three main OS's, there is a video on the site somewhere that is worth a look.
The editor is fairly straight forward and the commands look strikingly similar to SuperBASIC including turtle graphics, with a few odd box commands from Visual Basic thrown in (such as Alert). Check it out.
Posted by Back 2 the QL at 21:58
Email ThisBlogThis!Share to TwitterShare to FacebookShare to Pinterest